Nancy Holland was a member of the Canada’s National Team in 1959 and in 1964. She participated at the 1960 Olympics in Squaw Valley, California. She also participated in 1962 at the World Ski Championships in Chamonix, France. She was a member of the Olympic Team in Innsbruck, Austria in 1964. In 1970, she became a Level IV instructor and examinor for the Canadian Ski Instructors’ Alliance (CSIA). Between 1965 and 1988, she was a ski school assistant Director of Mont-Orford, Manoir Saint-Castin and Parc du Mont Sainte-Anne. 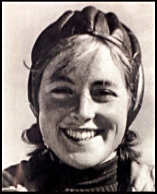