Born in 1918, Peggy Johannsen was the daughter of the famous Jackrabbit Johannsen. She won many competitions during her ski carreer. She won the downhill of Red Birds Ski Club at Saint-Sauveur in 1933. She won the downhill of the Club Ski-To in 1935. She also won the combined Championship of the Penguins at Saint-Sauveur in 1936. She won the ladies Combined of Kate Smith Trophy at Lake Placid, New York in 1938 and the Quebec Championship Combined of Mont-Tremblant in 1939. At last, she won the combined of the McGill  Darmouth competition in 1941. 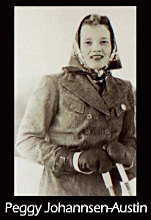