Born in Magog in Eastern Townships in 1927, Robert named « Bob » Richarson won the Canadian Championships, Nordic and Alpine combined competition in Saint-Sauveur in 1951. In 1952, he got the highest placed Canadian Olympic skier in Oslo, Norway. The year after, in 1953, he was the winner of the Quebec-Kandahar at Mont-Tremblant and Provincial Senior combined Championship. In 1954-55, he was the winner of the Colonial airline Ski Trophy and the Canadian Championships 1st combined. Also, he was a renowned Ski School Director in the Laurentians and the Eastern Townships during many years. 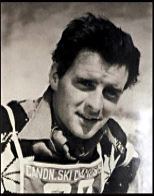