Alain
Cousineau
(1953)
Laurentian athlete who left his mark internationally in the ski world.
Inducted in 2012

Alain Cousineau is one of several Laurentian athletes who have left their mark on skiing not only in their region of origin but also on the national and international levels. In the early 70s he is invited to join the Laurentian Zone Team, progresses rapidly to the Quebec Team then to the Canadian Team where he will evolve from 1972 to 1975. He was Canadian slalom champion in 1974 (at Owl’s Head) and won the Quebec-Kandahar twice, in 1973 and 1974. One of those victories was by more than 7 seconds over the runner-up. He also participated in the World Championships at Saint-Moritz, Switzerland in 1974. From 1975 to 1983 he races on Bob Beattie’s World Pro Tour where he will record one victory and 24 top 4 finishes.He undoubtedly inspired his son Julien and contributed to his success. True to his region of origin, Alain Cousineau began his post-racing career by starting his own business in Lachute. 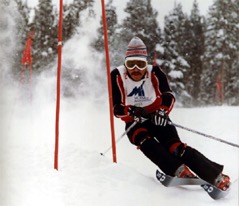