Alice Johannsen is well-known in the ski community as the daughter of Jackrabbit Johannsen. Born in 1911 in Cuba, Alice Johannsen grew up first in Norway, then in the United States, before settling in Canada with her family toward the end of her teenage years. After high school, she went on to McGill University. In Montreal, she worked first at McGill University, then at the Redpath Museum, before being nominated as director of all the McGill University museums in 1952, a position she occupied until 1971. Just after the end of the Second World War, she was one of the founding members and first presidents of the Canadian Museums Association (CMA). As far as the history of skiing is concerned, Alice Johannsen contributed in a remarkable way by founding the Jackrabbit Museum in Piedmont devoted to the memory of her father. It was this institution that later merged with the Laurentian Ski Museum. In 1993, she published The Legendary Jackrabbit Johannsen, a memoir of her late father, thus helping to confirm the prestige and notoriety of Herman Smith-Johannsen, who was by then known to us all simply as “Jackrabbit. 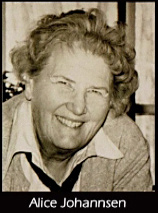