Bernard
Peissard
(1935)
Remarkable coach who contributed in the establishment of “ski-étude” programs.
Inducted in 2004

Bernard Peissard is well known in ski racing circles. He has coached in Alberta, on the Gatineau Hills North of Ottawa, in the Eastern Townships and the Laurentians. He coached the Quebec ski team and, since 1994, he has been head coach of the Mont-Tremblant Ski Club. Born in Switzerland, Bernard is a remarkably motivating man who has achieved exceptional results. In 1998 he was named Alpine Ski Coach of the Year by Alpine Canada and the Canadian Ski Coaches Federation. Peissard spent more than 10 years with the Quebec Team and has produced a long list of top level athletes including Josee and Lynn Lacasse, Andrea Bedard , the two Lussier (Catherine et Patrick), Lucie LaRoche, Francois Jodoin and others who have reached National Team level. 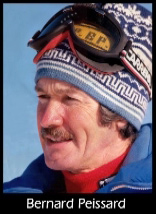