In the early 50s, Gigi Séguin made a good impression on the local and North American scene. In 1954, she was among the top 10 skiers in the world in slalom, giant slalom and downhill. As a member of the National Ski Team from 1955 until 1958, she participated in the 1956 Olympics at Cortina d’Ampezzo, in Italy. Although her familial activities put an end to her competition career, she always stayed very active in the world of skiing. She organized competitions of all levels and was president of the Nancy Greene league at Mont-Sainte-Anne from 1968 to 1970. 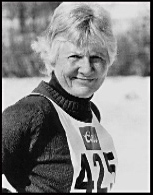