Bob Gilmour was one of the Laurentians and Canada’s best alpine racers in the 50s and early 60s. Among his many achievements and victories, he was a member of the Canadian Alpine Ski Team from 1959 to 1962, member of the 1960 Canadian Olympic Team, won the Taschereau downhill race in 1953 as well as the Quebec- Kandahar in 1956. He was a coach of the Canada ‘s National Ski Team in the early 60s and coach of other provincial and local ski clubs for more than ten years. His racing days over, Bob pursued a long and successful career as distributor of ski and snowboard equipment, notably as president of Gilmour Sports. 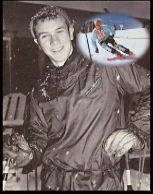