Carlyn Kruger-Dodds was chosen, at age 15, for the 1952 Olympic Team but had to decline because of injuries. She did however make the 1956 Canadian Olympic Team for Cortina d’Ampezzo. Carlyn’s greatest skiing achievements include: Canadian amateur Champion in 1951 and 1955, 3 Quebec-Kandahar victories at Mont-Tremblant, two International wins in Lake Placid, fifth in the combined at Zermatt in 1956, 22nd in the Olympic Downhill at Cortina d’Ampezzo and 23rd in the Olympic Slalom at Cortina d’Ampezzo. After retiring from active competition Carlyn became a coach and an instructor. She co-founded the Ski Jays Ski Club of Montreal in 1956. 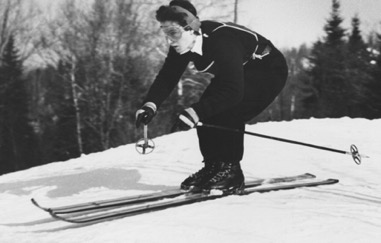