Born in Saint-Jovite on august 31st, 1918, Charles Duncan won his 1st championship at the age of 15. Belongs to the first team of instructors of the Canadian Ski Instructors’ Alliance (CSIA) has he was instructor and then director of the ski school at Mont-Tremblant in the north of Laurentians. After his return from the Second World War, in 1945, he became the manager of the Ski Resort. He died in 1991. 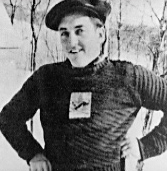