John
Eaves
(1953)
He is named “Freestyler of the year” by Skiing Magazine on three occasions.
Inducted in 1993

Son of Canadian Olympic skier Rhoda Wurtele, John Eaves was born in Montreal in 1953. He started skiing at age 2 and raced in the Laurentian Zone until age 13. He competed professionally in freestyleskiing from 1973 to 1982 and won 42 World Cup events. He won three World Aerial Skiing titles and three World Combined titles. He was awarded Skiing Magazine’s “Freestyler of the Year” three times. He won Canadian and Australian Freestyle Championships. John’s skiing exploits have led to an exciting film career where he has doubled Roger Moore in skiing sequences for James Bond movies A View To Kill and For Your Eyes Only. 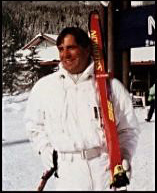