Louis Cochand, son of Émile Cochand Senior, took part in many ski races throughout Quebec between 1925 and 1935. He participated with success in 5 Quebec-Kandahar races between 1936 and 1941. In 1937, he won the Dominion Ski Championships in Banff. He raced in Switzerland, France, Czechoslovakia, Poland and Austria, winning many championships in 1938 and in 1939. Also, he was the coach of the Canadian Olympic team in Saint-Moritz, Switzerland, in 1948. 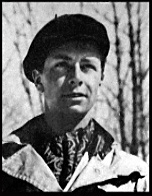