Luc
Dubois
(1946)
Director of many associations and programmes. Alpine Technical Delegate of the FIS.
Inducted in 1999

Captain for l’Équipe du Québec, Luc Dubois is forced to abandon national and international competition after a serious injury in 1964. He was a member of the University circuit in ski jumping, cross-country and downhill skiing between 1968 and 1970. He was a director for the National Ski Team between 1973 and 1976. He was the president of the Canadian Ski Coaches Federation and director of the Canadian Ski Instructors’ Alliance between 1979 and 1987. He was a founding director of the Canadian Association of Nordic Ski Instructors and of the Mont-Tremblant Crosscountry Ski Club and he was a FIS Alpine Technical Delegate in 1978. 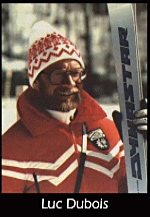