At 2 years old, Lucile Wheeler began skiing at Gray Rocks, close to Mont-Tremblant. At 12, she was the National Junior Champion, and by 14 she was on Canada’s National Ski Team. In 1956, Wheeler won Canada’s first ever Olympics medal in skiing, a bronze at the Games in Cortina d’Ampezzo, Italy. In 1958, she shattered the European monoply at the World Ski Championships by winning both the downhill and giant slalom titles, inspiring Canada to send a national ski team to Europe the following year. 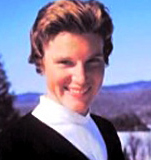