Marie-Andrée was one of Canada’s top cross country ski racers from 1980 to 1992 when she was a member of the Canadian national team. She began her racing career in 1977 when she joined “Les Fondeurs of Saint-Jérome. At 14 years of age she entered her first competitions. Two years later she won the cross country title at the Quebec Games in Amos. She also won several Sealtest Cup races in Quebec. In 1979, she joined the Quebec Team and the following year jumped up to the national team. 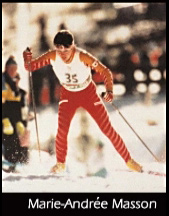