While working in Whistler, British Colombia, Michel Daigle registered himself, for fun, to a ski jump competition (distance) to which were registered some of the best jumpers at the time. To his amazement, he won the event! From 1973 to 1975, he won numerous competitions including three Canadian championships, three Provincial championships and a USA championship. He also invented a ballet figure, the “Daigle Banger, named after him. In his career he succeeded in three disciplines: aerials, moguls and ski ballet. 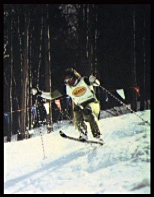