Monique Langlais was the winner of the combined for the Kate Smith Trophy at Lake Placid International in 1953. She was first in the combined at the Eastern Canada Championships in 1954 and she was also the winner of the Provincial Downhill Championships in Val-David on the “Shaky Leg” trail at Mont-Plante in 1955. The same year, in 1955, Monique Langlais, Canada’s best Olympic hope, was chosen to be part of the Canadian team going to the Olympics at Cortina Italy in 1956. Herself and her teammates, Lucile Wheeler, Carlyn Kruger, Ann Heggtveit and Gigi Séguin, were known as the “The Big Five”. Unfortunately Monique broke a leg training in Stowe at the end of 1955 and was unable to recuperate for the Olympics. It was to be her biggest career disappointment. 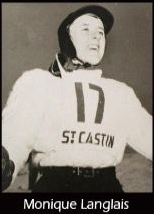