The Penguin Ski Club was the 1st women’s ski club in Canada. It was founded in 1932 by a select small group of enthusiastic young ladies to advance the standard of skiing proficiency amongst women. Established in Saint-Sauveur, the Club created the Junior Development program and the Ski Jay Ski School was formed, which expanded later to the Ski Chicks and the Baby Bears with some 1 000 younsters involved in the program. In 1991,the Penguin Ski Club was still going strong and continued to promote skiing both actively and financially. 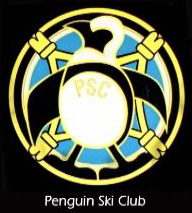