Per Hall arrived in Canada in 1940. Interested in skiing Per and his wife began skiing in the Laurentians where they saw the resort potential of skiing and began looking for an appropriate site. He found the Up-Hill Ltd. Their search brought them to Hills 70 and 71 in Saint-Sauveur where some primitive installations were already in existence. The site was excellent because of its proximity to the village of Saint-Sauveur and its easy access from Montreal by car, bus or train. It was in 1956 that the first mechanical groomer was purchased with a second T-Bar installed in 1958. Up-Hill’s first chair lift was erected in 1962 on Hill 70. Snowmaking and night skiing were also introduced in the early sixties. 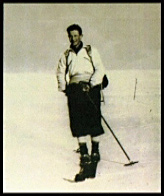