Raymond Lanctôt was known as an exceptional level IV ski instructor. He became a respected level IV examiner for the Canadian Ski Instructor’s Alliance. As a former director and president of the C.S.I.A., he was named a life member of this association. He was a ski instructor at Mont-Tremblant and Mont-Plante for several years. He wrote the first Canadian ski manual in French. 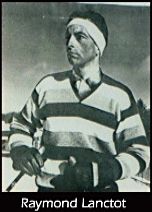