Rosemarie
Schutz Asch
(1930)
Athlete a part of the first Canadian women's team at the Olympics.
Inducted in 2009

Rosemarie Schutz, Alpine ski racer and member of the 1952 Canadian Olympic Team in Olso. She was part of the first four women team sent by Canada to Olympic Games. Her teammates were Lucile Wheeler, Joanne Hewson and Rhoda Wurtele. In 1954, her last year of competition, Rosie won practically every race she entered in Canada and the United States. 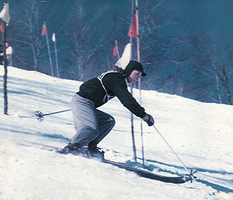