Joanne
Hewson-Reese
(1930)
Was part of the first complete Canadian women’s ski team at the Olympics. One of the first two women certified by the CSIA to teach in the Laurentians.
Inducted in 1996

Joanne Hewson-Rees Began skiing at 3 on Mount-Royal. From 1948-51, she skied on the McGill University ski team. In 1952, she was part of the first complete women’s ski team ever sent to the Olympics by Canada. She became one of two first females “certified” ski instructors by the Canadian Ski Instructors’ Alliance at Tremblant in 1953. Since her competitive career was over in 1954, she helped found the Ski Jays Ski Club with the Penguin Ski Club and coached the ladies ski team at McGill. 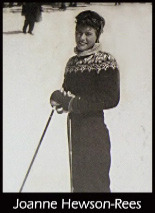