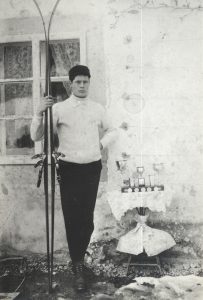 Summary of the exhibition

Émile Cochand was a professional ski instructor in his native Switzerland when he accepted an invitation by the Montreal Ski Club to come over and settle in the Laurentians. Émile was 21 years old, and the year was 1911. He adapted well to life here and became a force in changing the economic face of his adoptive region. By opening the very first ski centre, training other instructors, and involving himself in regional tourist development, Émile helped lay the groundwork for the ski industry, soon to transform the Laurentians into a mecca for skiers and resort vacationers.

The name “Cochand” also calls to mind Émile’s descendants, who followed in his footsteps, dedicating their lives to the development of ski in the region.

This exposition does not retrace all the steps in Émile Cochand’s remarkable career. Instead it calls up selected memories that bear witness to the ways in which this man and his family helped make the Laurentians into the birthplace of skiing in Canada.

Our thanks go to the descendants of Émile Cochand, who have donated several documents and artifacts to the Laurentian Ski Museum, all related to the life and career of their forefather.

The LSM would like to thank the CRÉ des Laurentides and the Chambre de Commerce de la Vallée de St-Sauveur/Piedmont for their financial support without which this exhibition would not have been possible.