Born in Morin-Heights in 1936, Corrine Whitehouse was a member of the Canadian team that raced at Lake Placid for the Kate Smith Trophy. Amongst other victories, she won the Taschereau downhill in 1953 at Mont-Tremblant. In 1958, she became the first woman to receive a senior rating (Level IV) with the Canadian Ski Instructors’ Alliance and then became an examiner for the CSIA for the next eleven years. 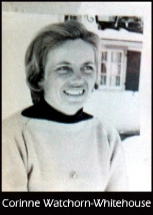