École Snow Eagle Ski School
(1947)
Prestigious ski school known for many decades as "the best in all of North-America.
Inducted in 2004

The Snow Eagle Ski School has a distinguished history of excellence recognized throughout North America. It was consistently called “the best on the continent. The quality of its instruction and instructors, particularly under Réal Charette’s tenure as director in the late 40s and through four decades, has been second to none. There is a saying that “if you have taught at Gray Rocks you can almost write your own ticket at other ski resorts. It was the Snow Eagle Ski School which invented the “learn to ski week in the 50s as well as the “ski bra, a teaching aid developed by instructor Freddie Albers to help maintain ski tips together while teaching the snowplow. It’s ski school directors over the years form an elite few: Hans Faulkner, Herman Gadner, Luggi Foeger, Réal Charette, Eddie Eustace and Wayne Bradburn. 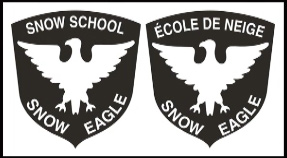