Joe and Mary Ryan’s contribution to the world of skinng was the development of Mont-Tremblant in the Laurentians. Joseph « Joe » Ryan buy the mountain from Quebec in 1937. In 1939, he opened his resort. All this was done in a remarkably short period of time and the resort quickly establishing a world-wide reputation for quality and attractiveness. Joe Ryan’s wife Mary played a strong supporting role in the resorts development. She ran the hotel from 1950 to 1965. She created gardens, and implemented soning so Tremblant Lake wouldn’t be polluted. Im 1963, she created the famed Ryan Cup in memory of her husband. After, she ran ski races and with son Peter’s help was the first to have the ski report aired on Montreal morning radio. 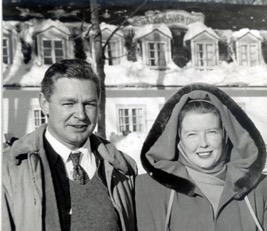