Lynn Lacasse began skiing at the age of two. By six she joined the Laurentian Zone’s Nancy Greene League and by twelve she entered her first FIS race despite being below the legal age of 14. At 14 she was on the Laurentian Zone’s Elite Team and by 15 she joined the Quebec Team. By the age of 16 she was a member of the Canadian National Ski Team competing internationally on the Europe and World Cup tours. 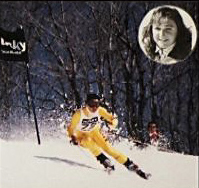