Murray Yeudall is a man that wore many hats during his career in the ski industry. First director of Mont-Avila Ski School in 1959, a station to which he contributed building, he also distinguished himself in many ski schools in Quebec, Canada and United States. He was very active within the Canadian Ski Instructor’s Alliance, for which he was president in 1970-71. He was a member of the National technical committee for many years and a senior examiner for the Alliance. He also represented Canada at numerous Interski conventions. 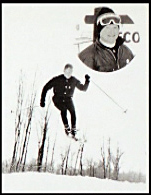