Diane
Culver
(1952)
First women to be chosen as part of the CSIA demonstration team for Interski in Sesto, Italy.
Inducted in 1998

Diane was a member of Canada’s National Ski Team from 1969 to 1973. She retired from competition in 1973 to take on new challenges in skiing. Those included teaching and coaching. She coached, among others Felix Belczyk and Deedee Haight at that time in Nancy Greene League at Rossland and eventually as National Team members. In 1975 and 1976 she coached the Canadian women’s National “B team. In 1979 she became level IV Canadian Ski Instructor’s Alliance (CSIA) examiner. Then, in 1981 she was chosen to become the first woman to ski on the CSIA demo team at Interski in Sesto, Italy. 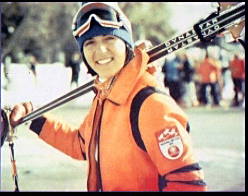