Founded shortly before World War II, the McGill Outing Club (MOC) is one of the oldest continuously running clubs of McGill University. Several hundred students join every year and share an interest in outdoor activities including skiing, rock climbing, hiking, cycling, canoeing and horseback riding. The MOC rented houses in Shawbridge in the 40s before McGill University acquired one in the 50s. Shawbridge was chosen for its easy access to Le P’Tit Train du Nord, its proximity to a great network of cross-country ski trails and the fact that it wasn’t as commercially developed as other areas in the Laurentians. Under the leadership of Herman Smith-Johannsen, the MOC became involved in maintaining a large network of trails around Shawbridge and many memorable trips. Today, the MOC continues to organize ski trips and to provide instruction for its members. 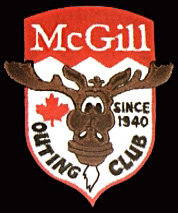