Pierre
Harvey
(1957)
The best Canadian cross-country skier of his time, on an international scale.
Inducted in 1998

Pierre Harvey was a member of Canada’s National Ski Team from 1981 to 1988 and has been Canada’s greatest cross-country skier competing internationally. He participated in the 1984 and 1988 Olympic Games in Sarajevo and Calgary and won three World Cup events, the only Canadian cross-country ski racer to do so. Then in 1988, in Oslo Norway the birthplace of skiing, Pierre won the 50k classical race, the greatest achievement of his skiing career. “It was like winning the stanley Cup in Montreal! remembers Harvey. After retiring from International competition Pierre continued to race in local and regional events as well as in several World Masters championships. 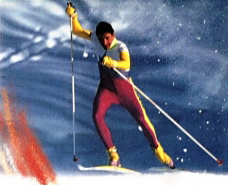